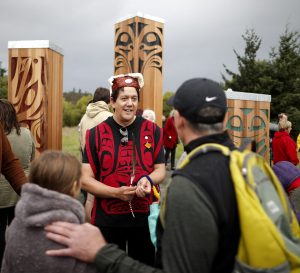 A new permanent public artwork, commissioned by Saanich to commemorate Canada’s 150th anniversary, was unveiled this past September at Cedar Hill Park.

Named ‘Earth Drums’, the work is by local artist Carey Newman (Hayalthkin’geme), who designed the artwork to engage people in reconciliation by asking them to change their relationship with the land. Three large “box drums”, intended to be played by hand, allow participants to interact with the artwork, creating music of and for the earth.

Newman is also the artist behind several other major artworks including the 12-metre-long Witness Blanket  which has become a national monument. Starting in 2012 he visited residential schools, churches, government buildings and cultural structures in 77 communities across Canada to collect 887 fragments of the residential-school era.  Talented in many media including wood, stone, gold/silver, gems, glass and painting, he is also a musician who studied piano at UVic and voice at the Victoria Conservatory of Music.

Carey was awarded the Meritorious Service Medal in 2017.  The following year, he was named to the Order of British Columbia and, more recently, was appointed the 6th Audain Professor of Contemporary Art Practice of the Pacific Northwest at the University of Victoria, a three-year position.

The mission of QCHCA is to be an advocate and trusted resource for sustainability, vibrancy and engagement in our community.